Scientists have been trying to explain how life got started on Earth since Darwin upended biology over 150 years ago. This same question persists in planetary science today: we explore our Solar System largely because we want to figure out if life also started up somewhere else. And if so, we want to find out how and why it starts at all.

We may soon have a definitive answer. It turns out Cassini may have sniffed hydrogen gas in the plumes of Enceladus, one of Saturn's moons known to harbor a large subsurface ocean beneath its icy crust. According to the research team, the release of hydrogen gas suggests the presence of underwater hydrothermal events similar to those found throughout our oceans here on Earth.

Due to tidal friction caused by the deep gravity well of Saturn, heating of Enceladus' core causes jets of material to erupt from beneath the icy crust, pictured here: 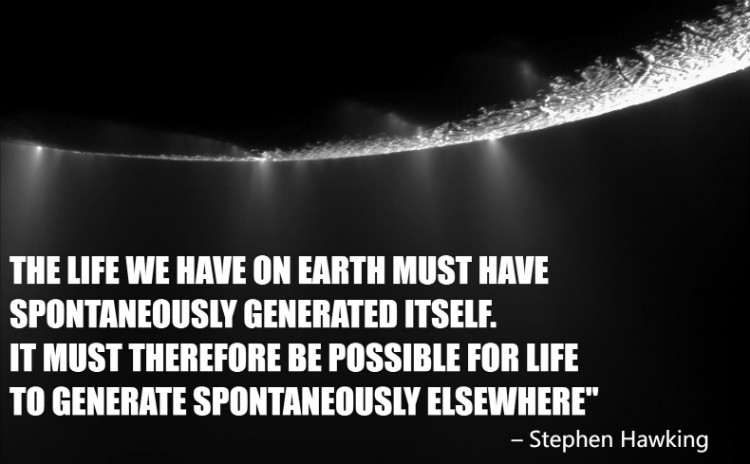 The plumes of Enceladus may be our best bet at finding signs of life elsewhere in our Solar System.

Far more likely is that life did originate here—under certain conditions, the first primitive organisms spontaneously popped into existence. But we don't exactly know what those conditions were, and we don't know the probability of life spontaneously occurring. This is a huge blindspot in our current understanding of the universe, of life on Earth, and of the possibility of life (both primitive and advanced) existing elsewhere in the cosmos.

But we do have some ideas. In Biochemist Nick Lane's book The Vital Question, he draws a strong connection between the origins of life and the chemical properties of underwater hydrothermal vents:

"Rock, water and CO2: the shopping list for life. We will find them on practically all wet rocky planets [or moons]. By the rules of chemistry and geology, they will form warm alkaline hydrothermal vents... Perhaps their chemistry is not always conducive to life. Yet this is an experiment going on right now, on as many as 40 billion Earth-like planets in the Milky Way alone. We live in a cosmic culture dish. How often these perfect conditions give rise to life depends on what happens next."

Here's a graphic of the geochemical process that could potentially be happening on Europa right now: 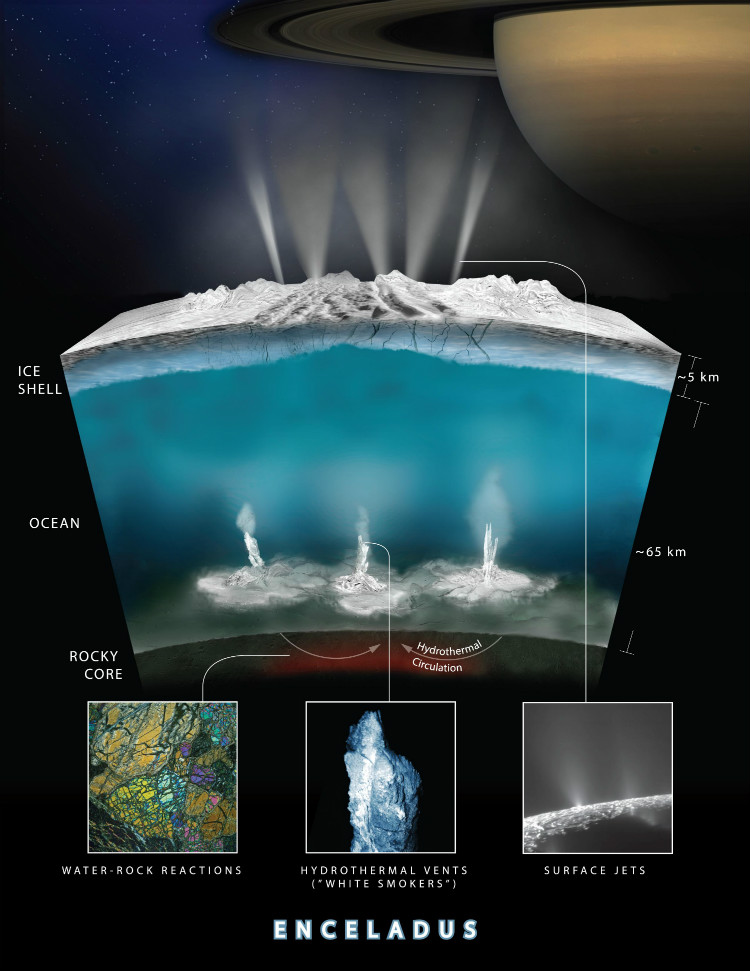 If life on Earth arose from the chemical processes found in deep sea hydrothermal vents, and Enceladus has similar conditions in its oceans, then it follows that life could also arise on Enceladus. We don't know the probability of this happening, but at the very least it's plausible. And if it's even plausible, then given a sufficient sample size, it becomes probable.

And the evidence is out there, accessible to us if we want it. Enceladus is gushing plumes of material out into the cosmos at this very moment: 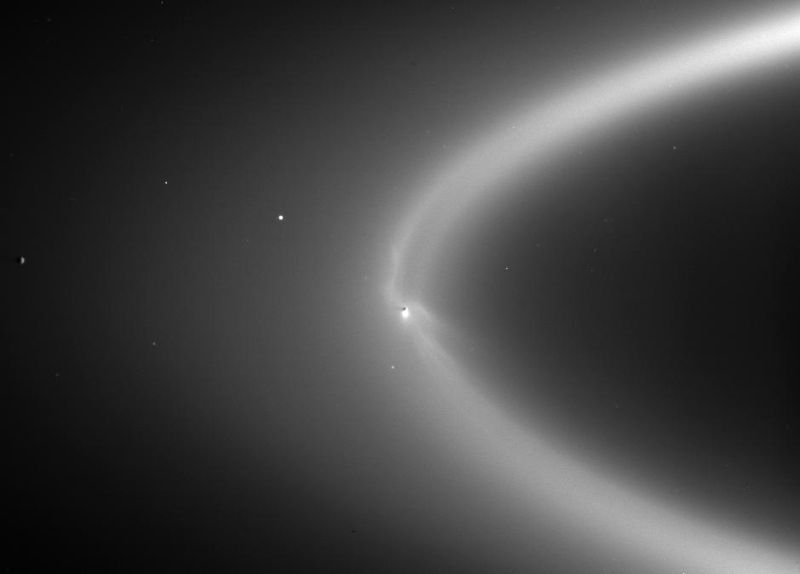 And if life does exist in the deep oceans of Enceladus, the evidence for its existence will be found in conducting a closer analysis of these plumes. Cassini wasn't built for such a task, but a future mission could be.

And it's not just Enceladus. A plethora of icy ocean worlds exist in our Solar System: Jupiter's moons Callisto, Ganymede, and Europa (which may have plumes similar to Enceladus) are all thought to host vast subsurface oceans, as is Saturn's moon Titan, possibly Neptune's moon Triton, and, as has been more recently suggested, possibly even Pluto.

We don't know if any of these worlds are suitable for life, but at least this provides us with a whole bunch of places to look (Mars isn't the only rodeo in town). We don't know the chemical constraints on the emergence of life, and we don't know if this postulated spontaneous generation is probabilistic or inevitable under certain conditions.

These are tough questions to answer, but they're worth figuring out. Perhaps the best way to get an answer is to launch a few probes out towards Jupiter and Saturn to sniff around. And while we're at it, a robotic lander to have a go at ice-fishing on Enceladus.