Officially named HD 140283, astronomers have given this ancient star the nickname "Methuselah," after the mythical biblical character who purportedly lived to be over 900 years old.

The general consensus is that Methuselah couldn't possibly be older than the universe—and yet, astrophysicists are confident that their age calculations, in both instances, are accurate. Rather than observational error, it could be that the way we approach physics itself is partly to blame for this discrepancy. Allow me to explain.

COSMOLOGY UP TO NOW

Everything started with the big bang. Prior to that, stars didn't exist, matter (as we know it) didn't exist, and spacetime didn't exist. For all intents and purposes, the term big bang simply represents an inferred starting point. It's the best model we have to explain the universe as we see it. It's not perfect, but nothing in science is.

What the big bang really describes is an era of rapid expansion. Previously, all of the matter in the universe had been clumped together in an area smaller than a subatomic particle. The big bang is the point at which all of this matter began expanding out into the surrounding void.

13.8 billion years later, it's still expanding—recent observations have shown that the rate of expansion even seems to be accelerating as time goes on. But let's take it back to the primordial universe.

Some hundreds of millions of years after the big bang, the first stars began to form. Since the universe at that time was much smaller and matter was much closer together, gigantic stars began to light up the cosmos. Known as Population III stars, these stellar ancestors were hundreds of times more massive than our Sun and consisted almost entirely of hydrogen and helium (the early universe contained mainly hydrogen and helium. All of the other elements—including the oxygen you're currently breathing—were fused later on in the cores of stars). 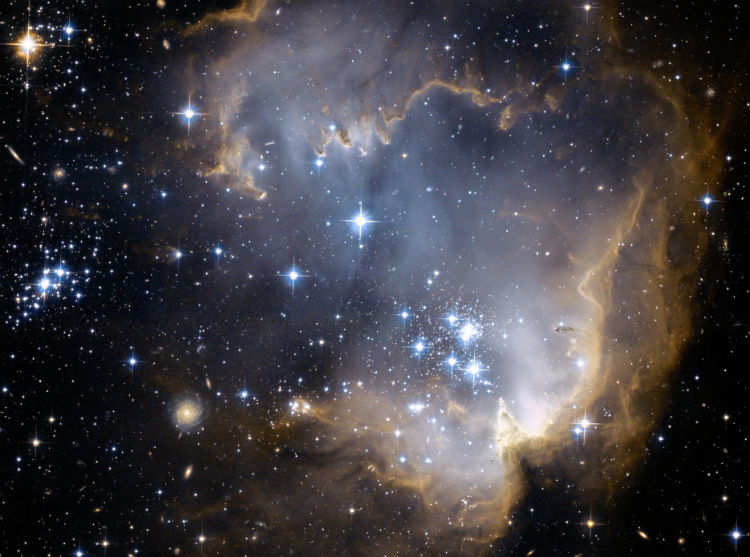 A cluster of stars in the modern universe. Population III stars would have looked a lot different. Image: NASA, ESA, and the Hubble Heritage Team.

In the cores of these giant stars, heavier elements were fused. Hydrogen and helium atoms combined to form oxygen, carbon, nitrogen, and most of the other elements that presently exist throughout the cosmos. At the end of their short lifespans, many Population III stars exploded as supernovae and spewed these heavier elements out into the cosmos, enriching the interstellar medium.

At this point, galaxies had yet to form; the entire universe was still a dense mass of gas clouds interspersed with the gigantic stars acting as heavy-element factories.

As the universe continued to expand, it also cooled. Some tens or hundreds of millions of years after the first Population III supernovae began introducing heavier elements to the cosmos, a new generation of stars began to form.

The proximity of HD 140283 to Earth means that it also happens to be the most well-studied Population II star in existence. And this is largely what makes its estimated age all the more surprising.

Mainstream cosmological models theorize that the first Population II stars didn't form until several hundred million years after the big bang. But HD 140283 presents us with a unique challenge—it appears to pre-date the big bang by about half a billion years.

Initial observations had estimated Methuselah to be around 16 billion years old, plus or minus two billion years. In order to resolve this apparent discrepancy with the age of the universe, astrophysicists employed the Hubble Space Telescope to look at HD 140283 with far greater accuracy than any Earth-based telescopes were able to do.

With the data gathered from Hubble, astrophysicists published a more accurate estimate of Methuselah's age: 14.46 billion years, plus or minus 800 million years. At the lower range of this uncertainty value, HD 140283 could be as young as 13.66 billion years old—which means that it would have formed just 160 million years after the big bang. Unfortunately, that timeline doesn't fit our cosmological models.

An image of HD 140283, the oldest known star in the universe. Image: Digitized Sky Survey (DSS), STScI/AURA, Palomar/Caltech, and UKSTU/AAO.

In a recent study, astronomers using ESA's Planck Satellite determined that the first light from the earliest star formation likely happened 560 million years after the big bang. This means that, while our observations of HD 140283 suggest that it could have formed as early as 13.66 billion years ago, our observations of the cosmic microwave background of the universe suggest that the earliest stars didn't form until 13.26 billion years ago. The numbers simply don't add up.

In a follow-up study, astrophysicists analyzed dating methodology by cross-referencing data from Methuselah with other observations of Population II stars that are 10+ billion years old (though none of these conflict with the apparent age of the universe). Upon refinement, astrophysicists published a new paper with an even more precise age for HD 140283: 14.27 billion years, plus or minus 380 million years. Here, the uncertainty was attributed primarily to distance-related precision alone.

Having failed to 'solve' the problem, the researchers stated that:

The most likely explanations for these difficulties, which would impact our results for the other subgiants as well, are (i) the absolute oxygen abundance that we have determined is too low, (ii) the adopted temperature is too low, (iii) the isochrone Teff scale is too high, or some combination of these possibilities. Alternatively, it remains a remote possibility that HD 140283 truly is older than 14 [billion years], and that current estimates of the age of the universe are too low.

Clearly, something here is amiss.

WHAT WE DO AND DO NOT KNOW

By definition, the process of science can never reveal objective truths about the universe. Every new discovery really only tells us how things appear to be to us, not how things really are.

One or more of our observations could be wrong. The laws of physics are being refined and expanded upon all the time, and this gradual evolution of theory does tend to make past theories seem silly. For example, less than a century ago, most astronomers though that the Milky Way galaxy was the only galaxy in the whole universe—now, recent estimates show there could be as many as 2 trillion galaxies in the observable universe.

Because of this tendency towards increased knowledge and more accurate theories, scientists are generally really careful. Astronomy is a slow and methodical science by necessity; in many cases, astronomers must literally wait for stars to align in order to collect the data they're after. It's unlikely that any of these observations are wrong, but there remains the possibility that the very act of observation and analysis may be missing some important information.

Our models of cosmic evolution could be wrong. This is perhaps the most likely culprit, though it would also come as a shock to the scientific community—as has every such paradigm shift that's ever happened. The problem with this possibility is that we don't even know what we don't yet know. There's the implication that something is missing from our physics models (though something is always missing), but we can't grasp what that might be—if we could, then it probably wouldn't be missing.

The solution to this one is just a function of time. In due time, it may turn out that our observations were correct, but that our assumptions about the age of the universe or the way in which the first stars formed were incorrect. Or, it may turn out to be a mixture of both. Either way, all we can do is wait and, in the meantime, admit that we just don't know.

The laws of physics may have changed over time. Shortly after the big bang, the universe looked unrecognizable compared to the cosmos of today—could its physical laws also have been different?

Evidence has gone both ways: some observations seem to confirm that the same physical laws existed 10+ billion years ago as exist today, while others show quite the opposite. But would it be so naive to think that we should spend more time thinking about how the physical laws got the way they are in the first place?

Acclaimed physicist Richard Feynman takes up this line of thought in the following video, beginning at 7:53:

When considering the current state of physics, Feynman states:

"It's as though we're doing a Chess game again, and we're working on the rules but we're not worrying about how the pieces are supposed to be setup on the board in the first place."

He then goes on to pose a very profound question: could the laws of physics also evolve over time?

"It's interesting that in many other sciences, there's a historical question. Like in Geology, they question 'how did the Earth evolve to the present condition?' In Biology, 'how did the various species evolve to get to be the way they are?' But the one field which has not admitted any evolutionary question is Physics. 'Here are the laws,' we say. 'Here are the laws, today'. How did they get that way in time? We don't even think of it that way. We think of, well, that was that way forever."

All things considered, this offers up a compelling explanation for the incompatibility between the age of HD 140283 and the age of the universe, respectively. For a significant portion of its lifespan, Methuselah could have been influenced by a different set of physical laws than what presently dominate the universe as we know it today.

This discrepancy in physical laws could have also led to discrepancies in our observations—and we're unable to resolve these discrepancies because our models of physics don't consider that the universe may have begun with a slightly different set of rules.

The implication of this evolutionary cosmology is that the laws of physics may continue to change into the future. Perhaps the physics of the early universe wasn't conducive to the formation of biological life, whereas the physics of today is.

Ten billion years in the future, the changing properties of physics may even allow for a completely new and exotic type of life to emerge that hadn't been possible before. And when that happens, biological life may become an obscure relic of the distant past—just like HD 140283 is to us.