Before a manned mission to Mars gets off the ground, NASA will need to address a few critical issues that could adversely effect the physiological and psychological health of astronauts during their journey to Mars.

And even if these concerns are addressed, there are still a few compelling reasons why it's not a good idea to go to Mars anyways (read: "Three good reasons to NOT send humans to Mars").

From isolation to radiation, here are the five key astronaut health concerns that still need to be solved before a journey to Mars can hope to get underway:

Depending on orbital alignments, the distance between the Earth and Mars ranges from between 55 million kilometers and 400 million kilometers—between 140 to 1,025 times further than the distance from the Earth to the Moon. This means that it could take as long as 20 minutes to send a message (at the speed of light) one-way between the two planets.

This distance is so great that, at their greatest separation, astronauts on Mars would need to wait over 40 minutes after sending a message or request to NASA before they could receive any kind of response. Because of this delay, astronauts visiting the red planet will need to be prepared to make decisions autonomously and independently—especially when those decisions require decisive and immediate solutions.

This communications delay between astronauts in space and mission controllers back on Earth has never arisen in a previous manned mission, and its negative effects haven't been fully explored. With missions to the vicinity of Mars potentially lasting two or three years, the inability to engage in real-time conversations with family and coworkers back on Earth may cause a human crew to begin thinking of themselves and their mission as a completely separate and independent entity from the Earth they left behind.

The effects of this time-gap could be amplified as astronauts step foot on Martian soil, finding themselves somehow more connected to and part of the new world of Mars and its alien environment. 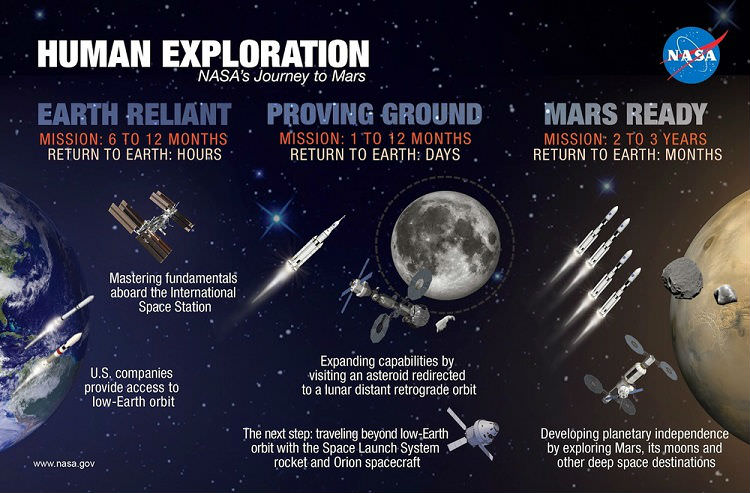 An infographic of NASA's proposed Pathway to Mars. Image: NASA.

In addition to this communications delay is the logistical nightmare of traveling millions of kilometers away from Earth and the impossibility of receiving a re-supply in any reasonable amount of time. Whereas astronauts on board the International Space Station (ISS) can receive a fresh shipment of supplies within a few hours of its being lifted from the launchpad, humans on Mars would need to wait at least 6 months for any such shipment to arrive.

This means that any medicine or replacement equipment required by the crew must be brought along or sent ahead of time—and in the case of any unforeseen illnesses or medical conditions, a rapid evacuation from Mars isn't possible like it is from the ISS.

With communications-delays and lengthy travel times, astronauts venturing to Mars will need to be capable of resolving a wide range of potential problems autonomously and with limited resources. Any failure to do so could be a death-sentence.

Although the journey to Mars will take humans to another planet, the vast majority of their time will be spent isolated inside of an enclosed spacecraft or Martian habitat. The concept of 'fresh air' will need to be cast aside, with astronauts learning to cope with living and working inside of a laboratory environment for the duration of their mission.

Imagine living inside of your house for three consecutive years without ever stepping foot outside (or even opening a window)—or, if you did go outside, you had to meticulously equip yourself with a bulky spacesuit that functioned as its own mini space station.

In addition to this isolation, astronauts will be wearing the same pair of underwear for months at a time and putting on a diaper every time they go for a walk in their space suits. Suddenly, the romantic notion of a journey to Mars begins to sound more like living in a nursing home for the elderly than exploring another world. 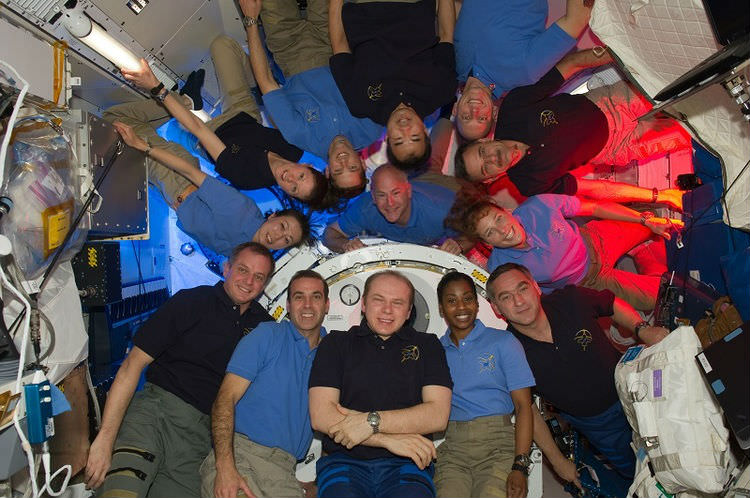 A record number of people crammed into the International Space Station: 13. Image: NASA.

Even when astronauts do step outside, they'll remain isolated from the Martian environment, breathing recycled air and operating with a limited range of motion. The psychological impacts of isolation are still being studied in various experiments funded by space agencies and private organizations around the world, and the success of a manned mission to and from the red planet will depend upon the human crew's ability to continue working as a team in stressful living environments.

Like Pauly Shore and Stephen Baldwin in the not-so-memorable 1996 comedy Bio-Dome, humans on Mars will be locked inside of a closed environment for years on end. In this situation, air quality becomes a central issue: there's always the possibility that contaminants could leak into the environment and cause adverse physiological effects if left undetected. 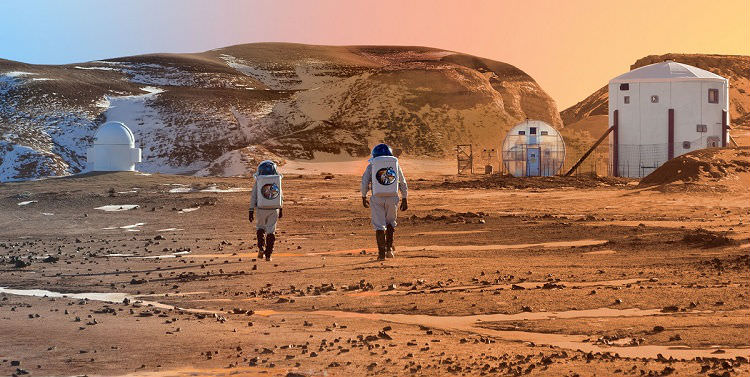 In addition to this, the immune system can become severely compromised while living in enclosed environments for extended periods of time—astronauts will need to take regular blood, saliva, and urine sample tests in order to track the status of their health. Any microbes carried into space with the astronauts will also remain with them for the duration of their mission, which carries the risk that these microbes could mutate, spread, and infect astronauts with weakened immune systems.

The potential dangers of living inside of an enclosed ecosystem are multiplied by the mission's distance from Earth—help is a long way away, and any health problems that develop during the mission to Mars will need to be solved with the resources at hand.

Another factor in deep-space habitation is interior design—astronauts will essentially be living inside of a laboratory for the duration of their mission, so designing a living space that's both functional and comfortable is of high priority to their psychological well-being. If astronauts are forced to live inside of an uncomfortable environment and conduct monotonous tasks for an extended period of time, their stress levels could spike and their performance could be compromised.

An environment that's both safe and comfortable is key to maintaining the psychological and physiological health of astronauts, and the ISS is an invaluable resource for testing the principles of a long-duration mission to Mars.

4. The Effects of Microgravity

In the micro-gravity environment experienced on board the ISS, humans are susceptible to a wide range of physiological degradation as time in weightlessness goes on. Bone density can drop by over 1% per month, greater than 10 times faster than it does in the elderly population on Earth.

Although rigorous exercise can counteract some physical degradation, astronauts living in micro-gravity do experience a continuous loss of muscle strength, endurance, and cardiovascular conditioning as time goes on. Since it doesn't take much strength or effort to float around in space, the human body quickly adapts to the lowered physical requirements of the weightless environment it inhabits. 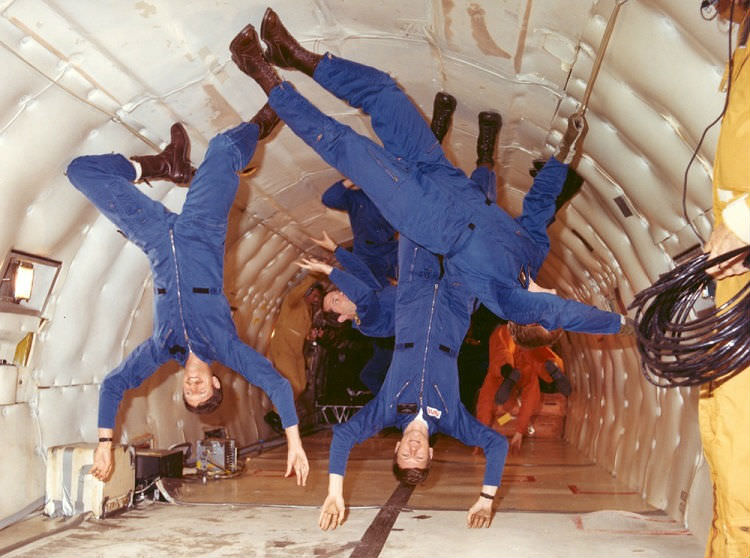 Astronauts practicing for weightlessness in a research aircraft. Image: NASA.

Because the human body is adapted to the effect of gravity constantly pulling fluids downwards, it counteracts this effect by pushing fluids upwards. This evolved trait becomes unbalanced in a weightless environment, causing fluids to continually move upwards into an astronaut's head.

As this fluid buildup and loss of muscle mass continues, astronauts can experience vision problems as well as a loss of spatial awareness, eye coordination, balance, and they become more susceptible to developing motion sickness.

Nutrition and exercise are extremely important in this weightless environment, and tests are being currently conducted on astronauts aboard the ISS to measure the level of fine motor skill degradation and other detrimental health effects.

But exercise and nutrition alone aren't enough—when astronauts return to Earth after having spent months aboard the ISS, they look like 100-year-old zombies: pale, barely able to walk, and closely monitored by teams of paramedics.

These effects could prove deadly when attempting to land on the surface of Mars. Even though Martian gravity is only 37% as strong as Earth's, the large g-forces experienced during descent to the Martian surface could severely compromise a human pilot's ability to control the spacecraft after having spent months in weightlessness. 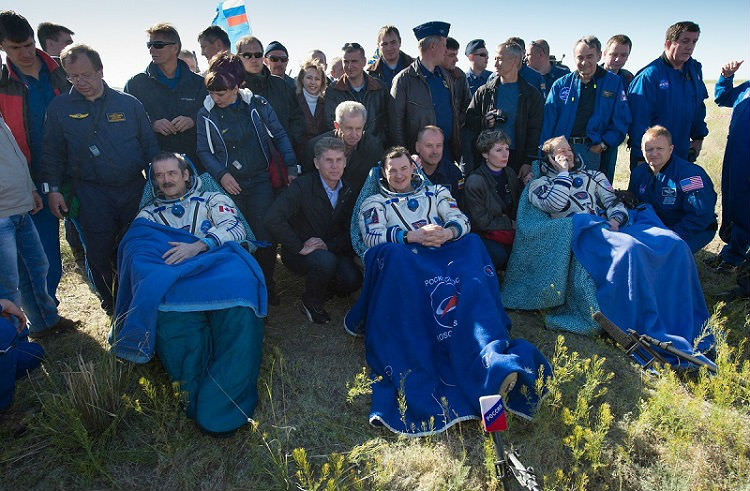 The only real fix to the issue of physical degradation in micro-gravity is having a spacecraft designed to create its own artificial gravity using centrifugal force—having a module that spins around a central point as a means of producing some form of artificial gravity.

The good news is that astronauts wouldn't need 100% Earth's gravity, just a fraction. Adding heavy weights to a 10% Earth-gravity environment would provide adequate muscle stimulation and bodily stress so as to simulate exercise in higher gravity, whereas weights don't help at all in a weightless environment.

Currently, weightlifting on the ISS requires resistance bands to push against a bar as it is extended by an astronaut. But this artificial means of movement doesn't perfectly replicate the gravitational effect of weightlifting under the effects of gravity.

With even a small amount of gravity to provide continuous stress on the skeletal structure, the adverse effects of living in micro-gravity for extended periods of time can be avoided.

One of the biggest X-factors in deep-space travel is the presence of cosmic and solar radiation. On the ISS, astronauts experience radiation levels that are ten times higher than would be experienced on the surface of Earth. But further out, beyond Earth's magnetic field, in the unprotected vastness of deep-space, that level could be quite a bit higher. 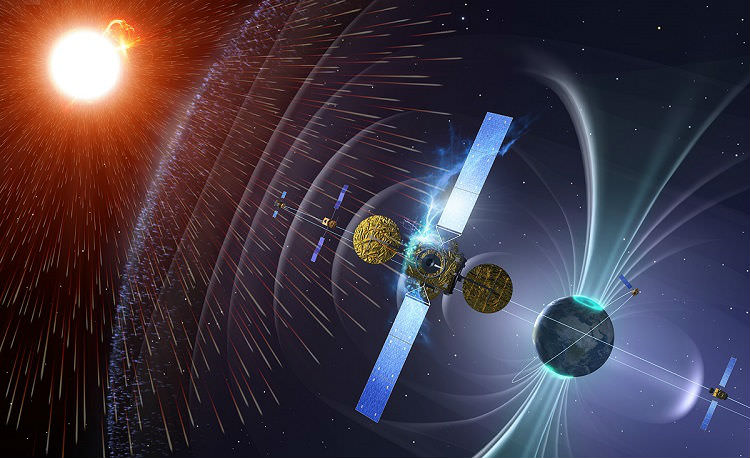 High doses of cosmic and solar rays can have adverse affects on the central nervous system, such as: impaired cognitive function and motor skills, behavioral changes, and a slightly increased risk of developing fatal cancer at some point in any given astronaut's lifetime. Extreme exposure could potentially lead to radiation sickness, and symptoms which include nausea, vomiting, fatigue, and loss of appetite.

NASA currently holds the position that any spacecraft heading for Mars with a human crew on board will need to incorporate an increased amount of radiation shielding—the more the better. But with added shielding comes added weight to the spacecraft, and every added kilogram could prolong the journey to Mars, leaving astronauts exposed to cosmic and solar rays for even longer periods of time.

Preliminary studies have shown that a two and a half year journey to Mars would expose astronauts to a quantity of radiation associated with a less than 5% added risk of developing fatal cancer at some point in their lives. Some critics, including Mars Society founder Robert Zubrin, have argued that this isn't enough of a reason to not send people to Mars, and that this small risk is well worth the possible rewards to be gained.

Further reading: "The Truth about Radiation and Human Spaceflight."

Unfortunately, unless a solution to the radiation problem is put in place, NASA is unlikely to send its astronauts all the way to another planet where, if radiation-related health problems were to develop, they would be stranded without access to adequate treatment. If humankind is ever to one day step foot on Martian soil, we'll need to first develop a means of remaining healthy in the hostile environment of deep-space.