It's a trick question. There is no face on Mars, nor is there a heart on Pluto. Our brains just trick us into thinking there is. 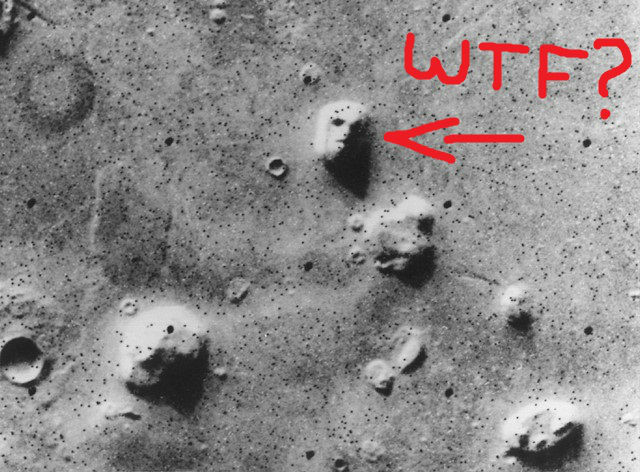 The face on Mars, captured by Viking, circa 1976. Image: NASA/JPL, edited by Dan Levesque.

NASA's Viking probe took that photo 40 years ago. That's right—an image of a feature on Mars that resembles a human face. At the time, Viking was cutting-edge technology, and it sure looked like there was a human face carved into the surface of Mars. 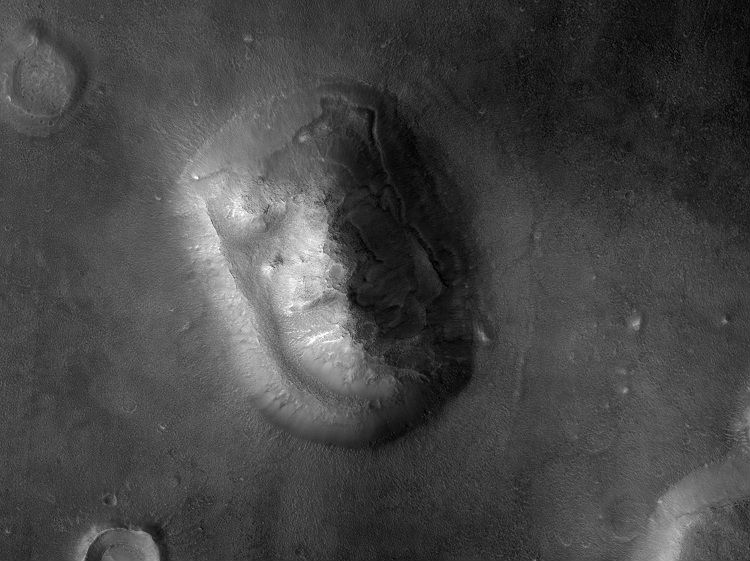 A face on Mars? Maybe not. Image: NASA/JPL/University of Arizona.

So, either there really was a face—and it somehow got covered up—or there was never a face at all. That doesn't mean the first picture is fake, just that it's a coincidentally weird picture of just one of Mars' many surface features.

If we look closely, we can see how the clearer modern image (left) could give rise to the older and less-detailed image (right) under certain lighting conditions and poorer optics. The protruding peak in the middle creates thenose, while the sunk-in areas give the illusion of an eye and part of a mouth.

The other side of the face is blocked by shadow, but our brain automatically fills in the rest. It's just the right amount of obscurity to get our visual senses tingling.

The culprit here is human psychology itself. As our species evolved hunting and gathering in large groups, we developed the skills of pattern recognition and facial recognition. The former allowed us to better track animals and understand seasonal cycles, while the latter allowed us to recognize individuals while living in larger groups or tribes.

The side-effect of this is that we a) see faces everywhere, and b) make assumptions about the origins of phenomena we observe in the world. Therefore, our inherent logic in this case is: observe a face carved into the surface of Mars—someone must have done it—must have been aliens.

Hey, here's another one: 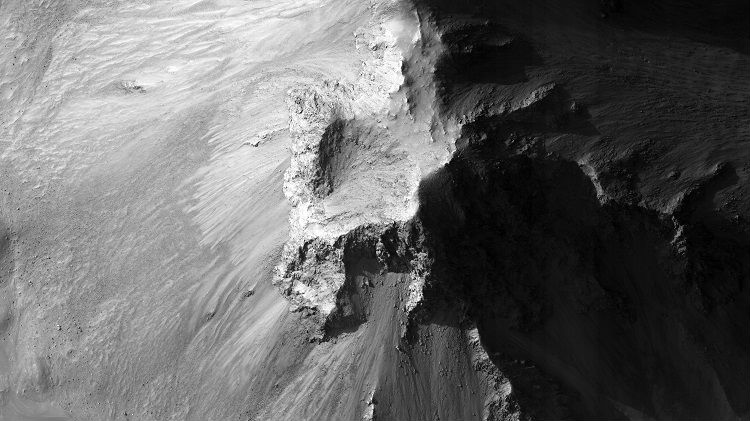 The Man on Mars? Image: NASA/JPL/University of Arizona.

And what it actually is: 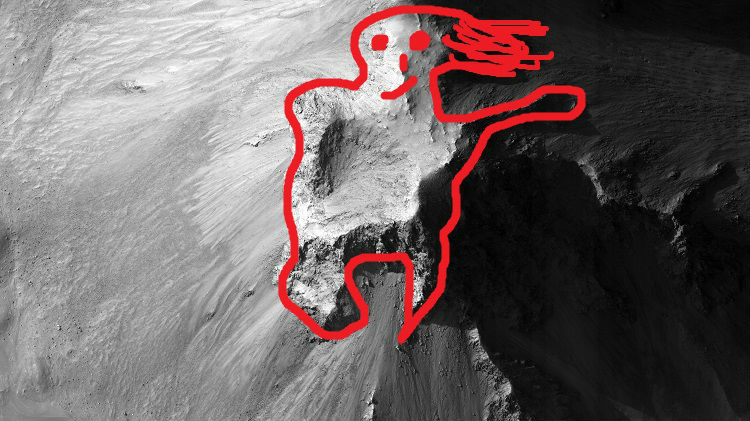 Don't tell me you didn't see it all along... Image: Dan levesque.

The thing is that, once you've seen the outline of a humanoid figure (mouse-over the image), you can't un-see it. It's stuck in your head every time you look at the same image or the same geological feature. 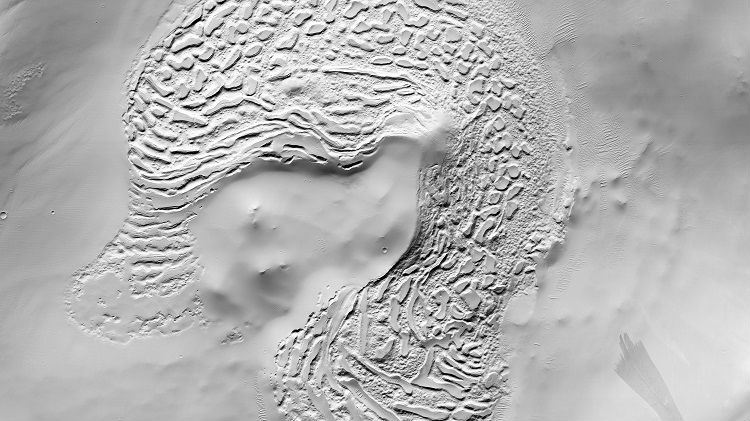 A Woman's Face on Mars? Image: NASA/JPL/University of Arizona. 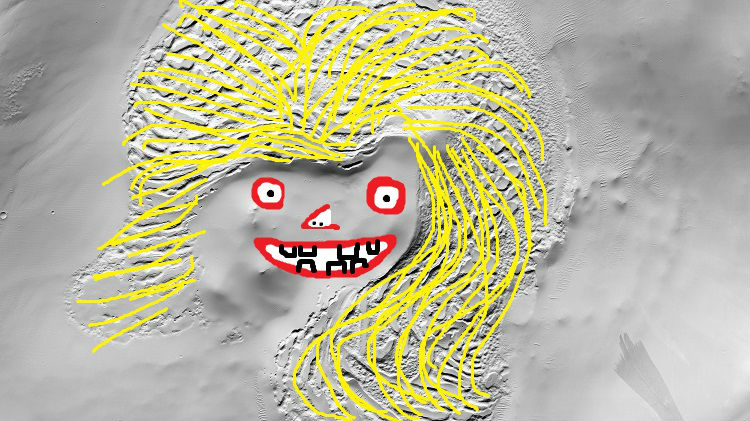 I'm not even an artist. Image: Dan Levesque.

Don't get caught up admiring my artistry for too long. Again, you can't un-see what has already been seen.

Ultimately, this is less a story about human faces appearing on Mars and more a story about the inner workings of the human mind. Even the HiRISE image can be made ambiguous; if you look at it long enough and apply some imagination, you can start to see certain facial features popping out of that rocky Martian feature.

The Sleeping Old Man on Mars? Image: NASA/JPL/University of Arizona.

If you're still following along, you should be able to see a face. You may even be convinced that it's really there.

To an extent, our internal beliefs are responsible for shaping our external reality. I mean, you can't just believe that you're Superman and then start flying... But, if you believe that some object you're looking at is a representation of a face, then you will begin to see the facial features that you're expecting to see.

The 'Face' on Mars is simply a freak coincidence (camera and lighting conditions) combined with our evolved capacity to rapidly recognize things that look like faces. And when we see something that looks like a face carved into the surface of another planet, it grabs our interest in a big way. 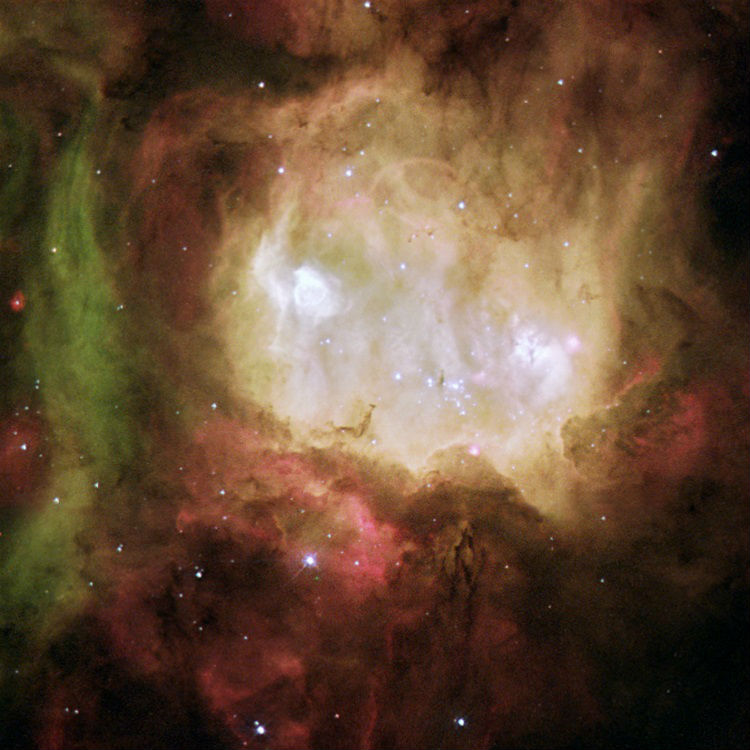 This is a nebula that looks like some kind of demon, something out of Lord of the Rings. But it's super ambiguous. We see what could pass as eyes, and an outline that looks more like a cat's head than anything else. Despite this functional ambiguity, as soon as you recognize it as a face-like structure, it sure starts looking like a face. 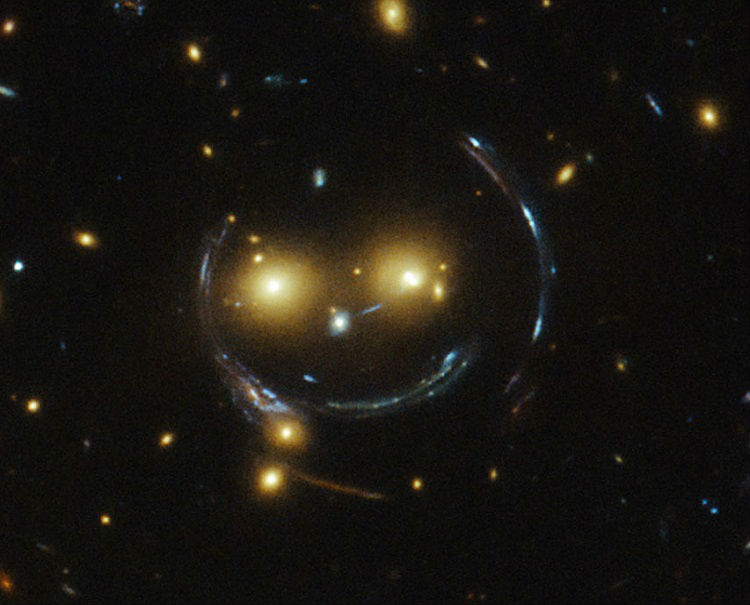 Another creepy face in the cosmos. This one is caused by gravitational lensing—the light from the stars in the background is being bent, via gravity, around the star in the foreground, creating the illusion of a sphere of light.

This sphere happens to form what looks like a smiley-face emoji; the background stars form the eyes, the foreground star the nose, and the gravitationally-bent light creates the round head and smile. It's a near-perfect illusion.

The thing with these instances of cosmic faces is that they can't possibly be artificial. From any other vantage point other than Earth, they would look completely different—they wouldn't look like faces at all. It's simply bychance that we can look out at the cosmos and see this face-like feature. But considering that there are billions of stars to look at out there, at least a couple of them are going to be aligned such that they appear face-like.

And then there's the curious case of Pluto. Disney's "Pluto the Pup," a canine animated character, was conceived in the same year that Pluto the (now dwarf) planet was first discovered. At the time, we had no image of Pluto; we didn't know that it had this giant oddly-shaped bright feature on its surface (known as Tombaugh Regio). So, what are the chances that a feature on Pluto (the planet) could in any way resemble Pluto (the dog)? Well, take a look:

Most people tend to see a heart first, though that could partially be because the headlines accompanying the release of this image were along the lines of 'New Horizons snaps picture of Pluto's heart'.

But then the internet started spreading the Disney cartoon version seen above, even though the shape is way off. And yet, it's hard to un-see. The dog on Pluto doesn't quite fit, it's made to fit—just like the faces I drew on Mars were made to fit with the terrain. It's that belief and imagination thing again: if you're trying to see something in nothing, there's a good chance you'll see it.

Part of this is that we demand familiarity when we look at the unfamiliar. The cosmos isn't an inherently ordinary thing to look at, but we want it to at least look like a friendly place. And for that, we begin to anthropomorphize. 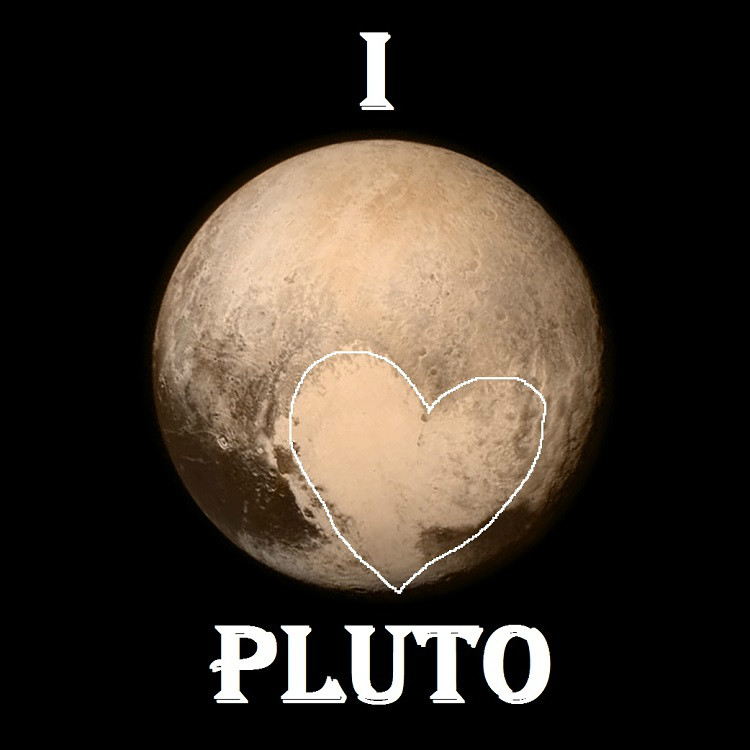 Whether you see Pluto's Tombaugh Regio as a heart or as a dog, either way, it's still being made to fit into our culture. Pluto isn't just an icy dwarf planet in the outer Solar System—it also has a heart. And a soul. And therefore it must have feelings, right?

It's also telling that these Solar System bodies are all named after mythological figures—gods and goddesses from Roman times. Mars, god of war, Venus, goddess of love, Jupiter, god of the sky, and now Pluto, god of the underworld. In ancient civilizations, these roaming planets were thought of as living gods traversing the night sky. We've been personifying the cosmos ever since we first started looking up.

Maybe that's why people get so upset when Pluto gets re-classified as a 'dwarf planet'. Because it looks like this is some kind of bullying, or name-calling, and this might somehow just hurt the little guy's feelings (yes, guy, because Pluto is a masculinized god—it's that anthropomorphization at work again).

And after all the excitement of having sent our first robotic envoy to visit the dwarf planet, Pluto must be heart-broken that new Horizons didn't decide to stay...

It's actually quite sad if you think about it. Image: BennuBird.

It's fascinating that there can be such an emotional connection with a celestial object. Pluto is just another small body in the outer Solar System, and yet it's become a sort of cultural icon—perhaps in large part because we think we see a big heart on its surface.

Admittedly, the heart is inherently endearing. When we look out at the stars, we want to feel a greater connection to them. And it's only natural that we would start to see a little of ourselves out there in the cosmos, because there sure is a lot of the cosmos in us.